Everyone knows being a soldier is hard. For those who’ve witnessed the worst things imaginable, the world can never be the same again; and for those that haven’t…the least we can do is listen.

A monologue from a soldier. He’s returned from the war, with the memories of the people he watched die during the conflict. He knows he’s killing himself drinking so much, but it’s the only thing that stops him thinking about it, in this monologue about post traumatic stress disorder (PTSD). 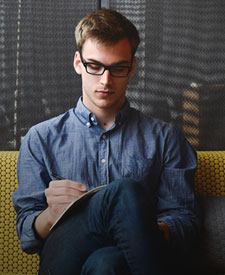